From traditional dance events, through exceptional Slovak theatre to modern art and summer festivals, the Slovak cultural scene is bustling with quality opportunities to feed your thoughts and soul. 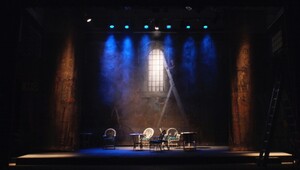 A list of the biggest theatres in Slovakia can be found at Slovakia.travel. In most towns, you can also find smaller independed drama clubs, for more info contact local tourism offices.

The oldest professional theatre in Slovakia is the Slovak National Theatre (“Slovenské národné divadlo” – SND) in Bratislava. It comprises drama, opera and ballet sections, each with a permanent professional company. The SND is a repertory company with a season running from the beginning of September to the end of June. Performances are staged every day except Sundays (opera and ballet) or Mondays (drama). In April 2007, a new building on the bank of the river Danube became the seat of the SND in addition to the historic building located in the Old Town of Bratislava.

Other state institutions are the State Theatre (“Štátne divadlo”) in Košice, the State Opera and Ballet (“Štátna opera a balet”) in Banská Bystrica (in Slovak only) and the New Scene (“Nová scéna”) in Bratislava specialising in musical repertory (in Slovak only).

A private theatre offering different types of performances is the Aréna Theatre in Bratislava (in Slovak only).

Theatre performances usually begin at 19:00 (at 18:00 on Sundays) and whilst tickets can be bought an hour before the beginning of the performance, it is advisable to reserve them several days before the performance at the ticket office of the respective theatre or online at www.ticketportal.sk or www.navstevnik.sk. There is also the possibility to buy a seasonal ticket.

There are also several unique theatre festivals in Slovakia, read more about them in Events & Festivals. 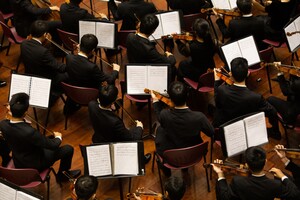 In the first half of the 19th century, a national musical tradition began to develop around Slovakia’s impressive folk heritage.

Romantic as well as modern Slovak music has drawn from both classical and traditional folk styles. Among romantic composers, the most important are the compositions of Ján Levoslav Bella and Viliam Figuš‑Bystrý who laid the foundations of the first Slovak opera, and those of Mikuláš Schneider‑Trnavský and Mikuláš Moyzes who had merit in lyric songs and ballads creation. Well-known works of the 20th century include the symphonic compositions of Alexander Moyzes, and the operas of Eugen Suchoň (1st Slovak national opera “Krútňava” [The Whirlpool]) and Ján Cikker. Today, music is one of the most significant aspects of Slovak culture.

Some of the most renowned orchestras are:

Musical performances usually begin at 19:00 and whilst tickets can be bought an hour before the beginning of the concert, it is advisable to reserve tickets several days before at the ticket office of the respective orchestra.

Tickets can be also booked online at Ticketportal.sk or Navstevnik.sk. 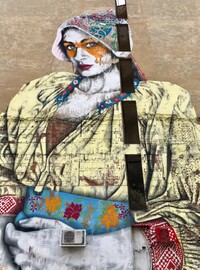 The most impressive ensembles performing traditional dance and music:

Most towns have their own folk festivals with dances, local costumes, food and their own unique local folk ensembles. Folk festivals tend to be held throughout summer until the end of September.

The biggest one takes place in Východná in July every year. 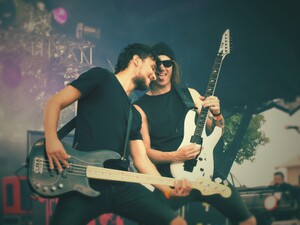 Slovaks love their music and although our songs are not worldwide famous, they are of world-class quality.

At Ticketportal.sk you can find information about concerts and buy tickets.

If you prefer the club scene with live performances, there are many options within different genres. For advice about the best local clubs, bars and places to enjoy live culture, contact SAIA regional office.

The Music Centre Slovakia (“Hudobné centrum”, www.hc.sk) provides information on classical and modern music. At www.ticketportal.sk you can find information on concerts and buy tickets. If you prefer the club scene with live performances, there are many options within different genres. 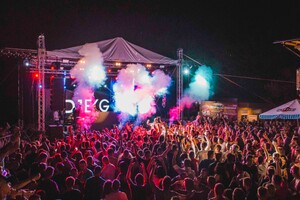 The biggest music and art event in Slovakia is the open-air festival Pohoda. The festival is organised annually since 1998, and it features alternative music, rock, pop, dance music, world music, house, techno, drum and bass, hip hop, but also theatre, discussions, chamber music, dance and literature workshops. Another big summer festivals worth visiting in Slovakia are Grape, Topfest and there are many more interesting annual events in Slovakia.

Find out more about Events & Festivals. 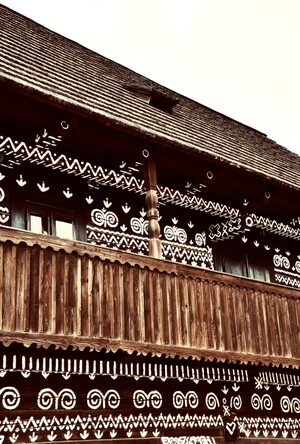 Folk art and crafts, which include woodcarving, fabric weaving, glass blowing and painting, pottery, ceramics production, blacksmithing, have a long tradition in Slovakia.

The tradition of folk art and crafts has been handed down through the generations and is nowadays supported mainly by ÚĽUV – Centre for Folk Art Production. The Centre sells traditional products and organises exhibitions, artistic workshops “ÚĽUV Craftschool”, “Craftsmen Days ÚĽUV”, both for youth and adults, some of which are officially accredited by the Ministry of Education, Science, Research and Sport of the Slovak Republic.

Slovakia became famous for Majolica pottery (“majolika”) already in the 14th century (especially in the town of Modra). The ceramic tradition of Modra was heavily influenced by the influx of Haban craftsmen in the 16th century. The Habans, also known as Anabaptists, were a religious sect that arose during the Reformation. The pottery is characterised by gentle curves and bright colours, particularly blue and yellow. The contemporary Majolica factory of Modra is a direct descendant of this tradition. You can also order Majolica pottery online.

Examples of folk architecture, such as wooden churches and brightly painted houses, are to be found throughout the country. Interesting open-air museums presenting folk architecture can be found in the Museum of the Slovak Village in Martin (“Múzeum slovenskej dediny”), Bardejov Spa, Zuberec, Vychylovka in Nová Bystrica and Pribylina. If you are interested in “living museums” (folk architecture reservations), you should visit villages like Čičmany (on the picture), Vlkolínec, Špania dolina, Ždiar, Podbiel or Sebechleby.

Wooden churches architecture is unique, especially by its construction and interior design. All parts had to be made of wood and no nails were allowed. In the northeast of the country, you may find most churches of Greek Catholic or Orthodox denomination. Most of them date back to the 17th and 18th centuries. One of the oldest churches is the Roman-Catholic wooden church in Hervartov near Bardejov dating back to the 15th century. Wooden churches and towers in the centre of the country were mostly of Roman-Catholic and Evangelical denominations.

More information about museums and historical and architectonic monuments of Slovakia is available at: 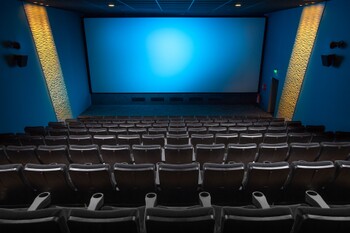 Cinema programmes are published on their own websites, towns’ websites, Kamdomesta.sk and Citylife.sk (both websites in Slovak only) and in newspapers. 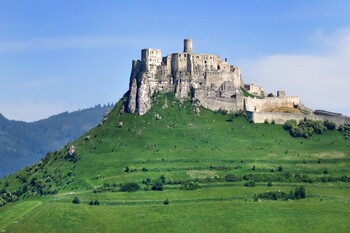 Slovakia has over 100 museums and galleries. You can visit various museums in Slovakia, for example, the Slovak National Museum in Bratislava comprising of 18 specialised museums (e.g. the Natural History Museum, balneological, mining, agricultural or archaeological museums, national music, coin, clock, furniture, folk costumes and military museums, or museums with historical expositions, and many more). There are also galleries to be found in almost every bigger town. Some of them have permanent expositions with artworks of famous painters of the past, but many offer inspiring contemporary art. The most precious art collections of old and modern masters are to be seen in the Slovak National Gallery in Bratislava, with artworks of Slovak and world painters and sculptors.

The art institution worth spending your free time on is the Danubiana Meulensteen Art Museum near Bratislava. It is one of the most romantic museums of modern art in Europe. A place where the freedom of the water surface area showcases the creative ideas of contemporary authors.

There are also other interesting galleries. To search for a museum or gallery by topic, visit Slovakia.travel. 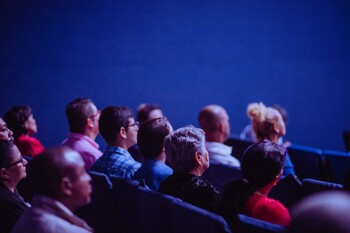 Since 2007, the science festival the European Researchers’ Night has been organised annually throughout Europe. The event is held in 5 Slovak towns – Bratislava, Banská Bystrica, Žilina, Košice a Tatranská Lomnica and features more than 1,000 researchers from all scientific disciplines and is attended by more than 150,000 visitors per year.

Also other science-related events are regularly organised: e.g. Week of Science and Technology focused on popularisation of science, as well as the Bratislava Open Lectures given by invited renown international experts from various fields of science, among others, Nobel Prize and Pulitzer Prize laureates. Those lectures are streamed also online.

The Slovak Spectator, an independent English language newspaper, is published every week. It includes information on politics, economy, business, daily life and cultural events in Slovakia, as well as advertisements.

There are of course many varieties of local newspapers and journals in the Slovak language. Most of the newspapers have also an online version. You can also buy their print version at newsstands. 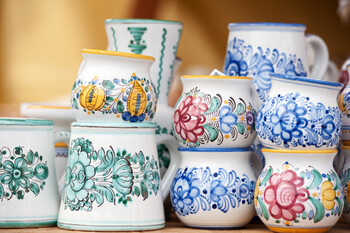 Photo: Shutterstock / VenturaSouvenirs include pottery, porcelain, wooden carvings, hand-embroidered clothing and straw figures, and food items. There is a number of excellent shops specialising in glass and crystal goods, while various associations of regional artists and craftsmen run their own boutiques.

Visitors of Slovakia also often bring home clothes/ magnets or other objects with Čičmany ornaments, which is one of the most famous ornament patterns of Slovakia. The Slovak Olympic team also wore this pattern in 2012 in London.